The Bathurst Support Group has been in operation for well over 20 years. 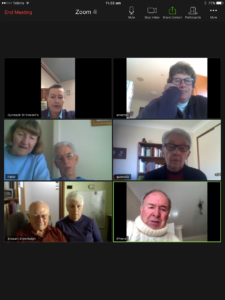 The date of its founding could not be established, but the Group was first started by the Aged Care team in this regional city with a population of more than 36,800 located on the Central Tablelands 200 kilometres west of Sydney.

Today Bathurst Parkinson’s Support Group is facilitated by physiotherapist Jennifer Mannell of Catholic Healthcare. She has been in this role for 21 years.

“We are an informal and strongly social Group which attracts a roughly equal mix of people living with Parkinson’s and care partners – whether they be spouses, relatives or friends.

“We have an attendance of around 18 people each meeting – not always the same people all the time. Some people drive for up to 45 minutes to join our meetings; we have members from Bathurst and surrounding towns and villages such as Mandurama, Oberon, Lithgow, and Portland,” said Jennifer.

The Bathurst Group meets on the first Monday of each month at a conveniently located Community Health Centre. Each meeting has a topic for discussion or guest speaker and content is focused on both healthy ageing and Parkinson’s – which covers the needs of both people living with Parkinson’s and their care partners.

When there is no speaker scheduled, Jennifer finds a webinar or other educational content to share with Group participants.

“I think one of the benefits of having an Allied Health person involved in a Support Group is that we have access to knowledge and a network of contacts that would otherwise not be available,” said Jennifer.

“Being associated with a team of people like Catholic Healthcare also brings the benefit of having a back-up for me if I am unable to attend a meeting, as well as administrative support that both relieves the workload on participants when information needs to be mailed-out, for example. Having our admin team assist with overheads is also a cost-saving for the Support Group.”

In addition to the Bathurst Parkinson’s Support Group, Jennifer runs exercise classes every fortnight. She is supported with this by a volunteer, Brianna, who drives 1 hour and 20 minutes from Cowra to assist with the classes. These attract both participants from the Support Group and other members of the Bathurst community.