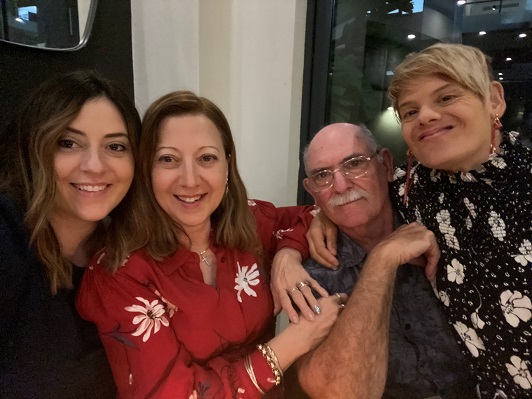 Cool Marie, as she likes to be called, is a force of nature.

While living with disabilities – and having endured multiple surgeries – Marie lives independently with drop-in support and is an enthusiastic contributor to her community.

She has raised thousands of dollars for Parkinson’s NSW and other charities through sponsored 12-kilometer walks, volunteers for Meals on Wheels, is a visual artist whose work has been published in the Developmental Disability Annual Report and a regional magazine – and gives inspirational speeches about her work.

But apart from her family, Marie’s greatest passion is supporting the Sydney Children’s Hospital in the Sydney suburb of Randwick.

“When Marie was young, she had three major surgeries at that Hospital. Afterwards, every time we drove past, instead of being scared she would say: ‘That’s my hospital. They helped me get well,’” explained Marie’s mother Santina.

“One day when she was older, she saved her pocket money and navigated two buses in order to deliver her money box to the Sydney Children’s Hospital to support its Channel 9 Gold Telethon. She did this on her own initiative, completely without our knowledge or assistance.”

Since then, Marie has continued her support by utilising her craft skills to create her own ‘Santa’s Workshop’ where she designs and creates stuffed toys for sale at pop-up Christmas markets and at the Hospital to raise money for the cause.

“I make and sell beautiful gifts and I give the profits to the Sydney Children’s Hospital,” explained Marie.

The products and artworks are branded Made by Cool Marie and are also sold on Marie’s web site here.

“I came up with the idea during the COVID lockdown,” said Marie. “Seeing the kiddies (at the Children’s Hospital) get better makes me very happy. I love helping and I love my community.”

“Lockdown is also where I started thinking more about exercise for myself and others – especially my dad. I love my dad.”

For more than 50 years, he ran his own business as a commercial refrigeration mechanic and was well respected both for his technical skills and as a mentor for many younger tradesmen in the field.

While he was busy running his business, John and Santina were also supporting Santina’s very elderly mother. John was diagnosed with Parkinson’s just three days after his mother-in-law’s funeral – so the couple was grieving for multiple reasons.

“It was heartbreaking; it changed our world,” said Santina. “Suddenly we were in retirement, and it was nothing like what we had planned for our lives.”

Looking back, John realises he had been experiencing anxiety for at least a year before his diagnosis at age 69. As his Parkinson’s has advanced, John has also experienced issues with his balance, tremor, chronic pain, and difficulty sitting down and getting up again.

His condition was also complicated by three hospitalisations necessitated by a ruptured appendix and related infections.

“I used to love playing the piano, but I can’t manage that any longer. My attitude now is I need to focus on the possible – and that includes family outings which are my great joy,” said John

Initially Santina and John did not tell Marie about the Parkinson’s diagnosis. However it wasn’t long before she noticed that there were certain things that John could no longer physically manage, so she directly asked her mother what was wrong with her father.

After Santina explained what Parkinson’s is and how it affects John now and will continue to do in the future, Marie – along with her younger sister Natalie – became a co-carer and cheerleader for her dad.

“Natalie and Marie are very close; they have been ever since Nat was born,” said Santina. “From when Natalie was little onwards, she has been Marie’s greatest mentor and protector.

“Also, without me saying anything to Natalie, from an early age, she ended up being the best therapy by example for Marie! They still do a lot together – including exercise and working on Marie’s fundraising ventures.”

Now that Marie understands Parkinson’s, she reminds her father when it is time to take his medicine and encourages him to join her in exercise – another of her great passions.

Walking has been excellent for Marie too, helping her lose weight and dramatically reducing the arthritis in her hips and knees. Other exercises she enjoys are boxing, bowling, and basketball.

“Our girls are keeping us buoyant and now we are actively seeking more information about how to slow the progression of Parkinson’s,” said Santina.

That led John and Santina to attend a Parkinson’s NSW Information Seminar where they met other couples living the same experience and were invited to join a Parkinson’s Support Group.

“We are looking forward to trying that. As John says, as a family we need to keep seeking out what is possible for us,” said Santina.

Two of Marie’s original artworks were selected to be featured in the Department of Developmental Disability Annual Report
www.3dn.unsw.edu.au/sites/default/files/documents/3DN-Annual-Report-2021.pdf