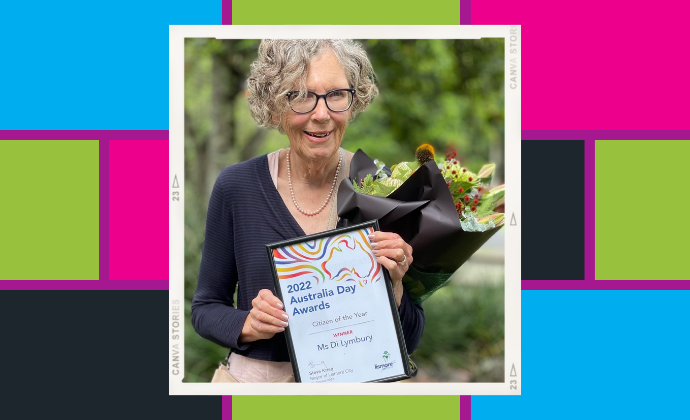 Di Lymbury, long-time leader of the Lismore Parkinson’s Support Group, was honoured in the Australia Day Awards as Citizen of the Year.

The Award recognises her role since 2015 in creating, nurturing, and maintaining a safe place for citizens of Lismore and its Local Government Area who are living with Parkinson’s, or caring for someone who is.

A tribute from her Support Group states:

She has humbly served the community without fanfare or applause yet has made, both directly and indirectly, degrees of difference in people’s lives that can only be measured in magnitudes.

“Those who experience the diagnosis of Parkinson’s and their carers belong to a very special group. As a result of their daily battles, I believe they have learned a great deal of tolerance and understanding and have also developed great empathy for others.

“They have learned the value of support and friendship. They have learned to value what is truly important and to take the time and, in some cases, make huge adjustments in their lives in order to do those things that are of most import.

“In the role of a Convenor of Lismore Parkinson’s Support Group, I’m inspired by the participants – those with Parkinson’s as well as their wonderful carers – and I already feel richly rewarded.

“To then be honoured by the broader community is a very high honour indeed. I am extremely humbled that some have taken the time to nominate me for these awards. I am aware that there are many community members deserving of such an honour themselves.

“I consider myself most fortunate to be chosen as the Lismore Citizen of the Year, 2022, and am most grateful to Lismore City Council. The response has been overwhelming.

“With its two major hospitals, Lismore Base Hospital and St Vincent’s Hospital as well the University Centre for Rural Health, Lismore has for many years served as a base for many of the health services that meet the needs of rural communities right across the North Coast Region. Our group’ s aim for a Parkinson’s Nurse appointment is to help service not only those in our immediate community, but to reach out to the more isolated rural areas from Urbenville to Yamba and everywhere in between.

“Our entire Parkinson’s community would benefit greatly from such an appointment. I am very much looking forward to reaching out to many more who are living with Parkinsons, to continuing my role with an extra special group of people and to work to improve the lives of many in our community. I shall also continue to value the role that Parkinson’s NSW plays.”