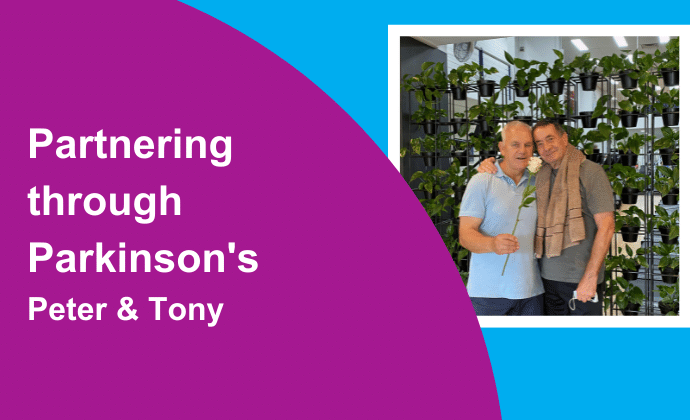 Tony and Peter, who live in Wahroonga, have been in a relationship for more than four decades. So when Peter’s unexpected diagnosis of Parkinson’s disease came six years ago, neither said they expected it to be a problem in their relationship.

“I was quite confident that Tony would stay, and we would sort things out,” said Peter, now 70. “He was my first real relationship. We married in 2018 but we have been together now for 47 years now.

“The diagnosis came about after a friend told me that I had no sense of smell. I was 64 then, and also had a slight tremor of my right hand. I went to our doctor, and she said she thought it might be Parkinson’s, and she confirmed it on the next visit.”

For Tony, 76, the shock was that his partner could be unwell.

“Peter played rugby union, he was always the one to lift the heavier things, but he was very gentle by nature,” he said.

“He was always fitter and could run faster and further so it was a real shock that he had Parkinson’s. In some ways I quite liked the idea of looking after him, but I’ve learned I’ve got to be careful of not doing too much for him.”

Peter was able to maintain the ability to do most things for the first two years, but then things began to change.

“At first he was OK, just a bit shakier,” said Tony. “He was still doing long walks with our dogs, up to five kilometres sometimes, but then he started getting pains in his legs and have disturbed sleep.”

“I couldn’t sleep normally, I’d end up going back to bed during the day,” said Peter. “I was worried that I’d fall asleep at the wheel, so I decided it was time to give up my license.”

“This was difficult for me to see him becoming more depressed, as he was always the organiser, the strong one in the relationship,” said Tony. “There was more on my shoulders as I had to take over things. But I also had to be careful to let him do things he can still do, for his own self-esteem.

“Peter has always been the cook, and he’s a very good cook. He’s slower at doing it now, but when we stayed up at Gloucester recently we had a dinner party for eight people with four courses. Peter planned the menu so that different things could be prepped over the preceding days and thought it all through. It took a little more time, but it was a huge success.”

For Tony, compromise has been necessary in a whole range of things as time has passed.

“I can’t just go and read a book for hours,” he says. “I have to be aware of where Peter is, if he needs something. I won’t let him go up to the shops on his own, although he wants to. I’m afraid of him falling over. I’m not sleeping well because Peter isn’t and wakes up two or three times a night, which wakes me up too. I tend to get a little bit cranky.”

“I was beginning to lose self-esteem as there was more and more I couldn’t do,” said Peter. “I had to find things I could do. I was always very active and didn’t want to give things up. When I was planning the dinner party I tried to draw Tony into it too, I like doing things together with him.”

Just prior to Peter’s diagnosis, the couple had decided to sell their house with a large garden, which Peter had created, and move into a townhouse with their retirement in mind.

“We were lucky in that we were able to get permission from our neighbours to keep our wonderful Labrador dogs,” said Tony, who hadn’t seen the townhouse before they moved in.

“Tony had hip-replacement surgery and I told him he just had to take my word for it,” says Peter, who had organised the purchase. “We love it, we don’t miss the old place at all. This place has great public transport and it’s not far from where we used to live.”

“Peter can still garden in the courtyard here with lots of pot plants,” said Tony. “We sold before we knew Peter had Parkinson’s, so that wasn’t a factor. This house is two-storey, and it is a concern that Peter might have an issue with stairs, but we could probably fit a stair-lift.”

While Tony and Peter both acknowledge the challenges and changes along the way, they continue enjoy their days as much as possible, making changes as needed.

“We always did a lot of travelling and we are still trying to do most things,” said Tony. “We had been offered an apartment in Cannes (France) and had planned to go in May, but I don’t think that will work now; perhaps we will do a cruise or a train trip.

“We still have a good life together, and I would like to think a good number of years to yet. I don’t have much family, but Peter has a fabulous family and we have so many supportive friends, too.”

“Tony and I had the best day of our lives when we were able to marry in 2018,” says Peter. “It was one of the great things to experience. We’ve never had too many dramas in our life, most of our time we agree on things. I am sure with Tony as my carer that we will live many more happy years together.”

“While we have the occasional hiccup, nothing has changed in our relationship,” said Tony. “We’ve always done almost everything together. Now we are probably closer than we’ve ever been.”

Parkinson’s in the Country