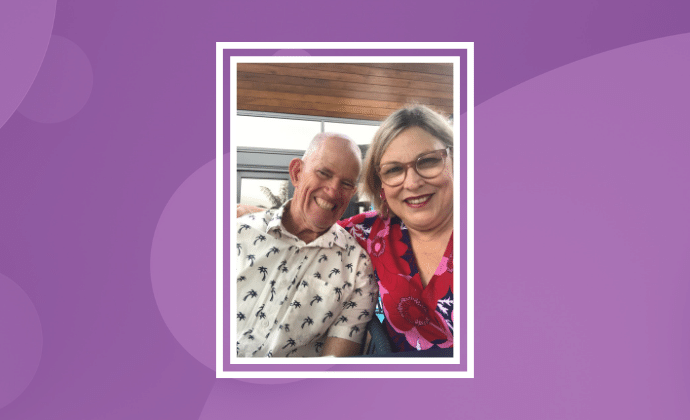 This is Tony & Maree Bush’s story:

Tony Bush was at work as a builder in Coffs Harbour when he fell from a ladder back in 2012.

“I had torn ligaments in my shoulder and went to a specialist to sort it out,” he recalls. “I also had a tremor in my right hand, which my GP had said was a pinched nerve. That was when I was told I had Parkinson’s.”

“It’s often misdiagnosed,” says his wife, Maree. “I had noticed the tremor prior to the fall. I was concerned at his prognosis but the neurologist we saw said that it was our own journey – everyone’s is different. That really stuck in my mind, and we have basically just dealt with what has come along. We just run our own race.”

Tony was still able to continue working for the next four years but eventually it became too difficult, more because he had a double hip replacement than issues with Parkinson’s. But there were also other business problems which were stressing the couple.

“We had people not paying,” recalls Maree. “We were not doing well enough in the business. It was a real stress in our relationship.”

“It was a relief to retire,” says Tony, who was able to get a disability pension and some NDIS assistance. “It was a problem that I just couldn’t keep the productivity up.”

“That was something I wanted to do,” she says. “I also get a carer pension. After Tony retired he was pretty self-sufficient, and we were able to go to New Zealand for a holiday for two weeks.

“He would take his meds every four hours and was able to go for slow bushwalks and take himself to the toilet. But when he got back he started to lose weight and had lost quite a bit before we realised the old medication had stopped working.

“It wasn’t long before he really needed 24/7 care. He would be getting up two or three times a night. That was the biggest shock. He had been progressing so well. It started to impact on our relationship. I was always tired. I just wasn’t getting enough sleep and I don’t handle things well when I’m really tired.”

Fortunately, Tony was able to get more NDIS funding to support his increased needs, which took some of the pressure off Maree.

“Before, I was able to do everything needed,” she said. “But I was losing spontaneity. I couldn’t just get in the car to go and have coffee or go for a walk on the beach with Tony anymore. But it is what it is, and it hasn’t pulled us apart.”

“It was really hard for me: going from being a carer for the family to the one needing all the care was very hard to accept,” says Tony.

Maree adds that Tony is a very patient man, and not hard to care for.

“He never complains, just gets on with it,” she says. “He has real dignity and self-respect. He didn’t used to have hobbies; his hobby was his work. But now he does a bit of woodwork here and there, with support. He’s made bedside tables and a hallstand and there are more things he’d like to do. And he keeps the garden nice.

“We used to do everything together. I loved going away on holidays and doing things, now I’m not free to walk out the door any time. You give up a lot of your life when something like this happens, but we are in this thing together.”

Since Tony has been able to access more support, Maree is building in some activities to look after her own wellbeing.

“I have a massage every month,” she says. “I need to do more regular exercise, and I used to also catch up with girlfriends. But we still have each other. Tony lost his best friend to a melanoma recently. We know things could be worse, and we try to look for the positives.”

A big positive has been Tony’s very recent Deep Brain Stimulation surgery a week prior to this interview.

“It’s been fantastic, I feel fantastic,” says Tony. “The neurologist put it this way: ‘The way you were was you were a horse-drawn buggy, now you’re cruising.’ There are not so many bumps.”

“I’m getting more sleep,” says Maree. “He’s been able to get up to the toilet himself, although he’s had a fall, he will get used to getting up again on his own. If it’s just those little things and nothing else, it’s wonderful. People don’t realise what a difference it can make. He looks ten years younger, because his face isn’t always screwed up with concentration. He hasn’t had cramps, so many little things.

“The ultimate would be to be able to go on a beach walk together. I don’t need a million dollars. I’d be happy with that. You’ve got to laugh, really. If you don’t, you cry.
Laughing has got us through many hard times.”

Get active and raise funds for people living with Parkinson’s

Parkinson’s Awareness Month provides opportunities to learn more about the issues facing people living with Parkinson’s every day – and how their lives can be improved.

No-Escape Room allows people to step into the shoes of people living with Parkinson’s and helps to shift the common misconception that it is a disease of the elderly.

Your donation will enable us to continue and grow services and programs that enhance the quality of life for people living with Parkinson’s.