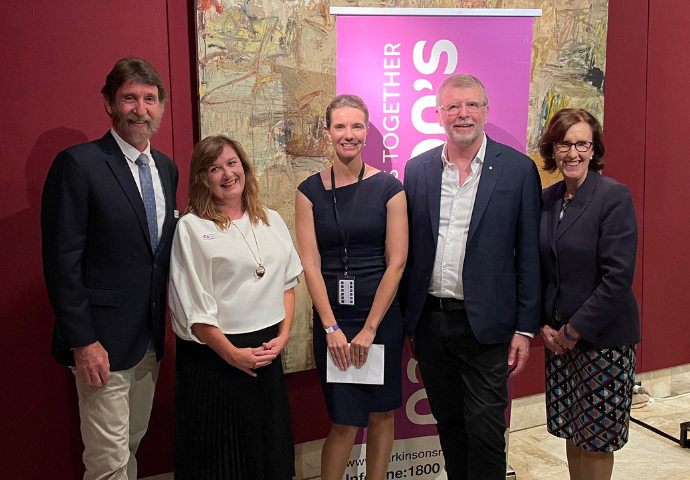 The crappiest lucky dip: my Parkinson’s journey, by a former deputy premier

More than 70,000 people in NSW live with Parkinson’s disease, yet it is not a well understood condition. It is probable that PD has been a part of the human condition for most of our history. It is described in ancient Chinese, Greek and Roman writing, and in Chapter 12 of the Old Testament book of Ecclesiastes.

It is no better or worse because the person with it is famous, such as the actors Billy Connolly and Michael J Fox or the singers Neil Diamond and Linda Ronstadt. But they do remind us that riches, fame or talent are no protection. PD brings everyone back to the pack.

I was diagnosed in 2010, not long after retiring as NSW’s deputy premier. For me PD has become a dominating, unrepentant and hated influence that has invaded my body to deform my abilities and sense of self. It came out of nowhere, set up shop and refuses to leave.

Monday is World Parkinson’s Day, so all I can do is give you some insights about what it is like to live with this condition.

Symptoms are different for every person with PD, but there are some common characteristics. It is a progressive disease; it gets worse over time. It is a neurological condition, having to do with the brain and the nervous system. PD is generally described as a movement disorder and the first symptom for many is often a tremor, but then about 30 per cent of sufferers have no tremor.

It can cause difficulty walking, loss of balance and a propensity to fall. Masking or a blankness of the face and facial expressions is common, as is the loss of fine motor abilities such as writing and keyboard skills. The condition is often accompanied by severe fatigue, disturbed sleep, a loss of a sense of smell, difficulty swallowing and problems with speech and, not to sugar-coat it, chronic constipation and erectile dysfunction.

Understandably, mood disorders such as depression and anxiety are also common, but again, no two people can expect to have the same profile of symptoms. It’s a lucky dip. Probably the crappiest lucky dip you’ll ever take part in, but you catch my drift.

PD is caused when nerve cells in the brain stop producing the chemical neurotransmitter dopamine. By the time the symptoms start to show, the damage is done, and dopamine production has ceased.

PD is more prevalent in men than in women, and more commonly, symptoms begin over the age of 60. It is progressive but does not, by itself, cause death. The most common causes of death are injury from a catastrophic fall or pneumonia caused by problems swallowing, leading to aspiration of fluid into the lungs.

Lack of knowledge about PD adds to the stigma, misunderstanding and fear that often accompanies the condition.

The first symptom I was aware of was a tiny movement in the ring finger of my left hand when under stress. I dismissed it. However, within a few years, it had become a fully fledged tremor, impossible to hide. At that time fatigue was the other chief symptom – bone-deep and impossible to remedy by an afternoon nap.

Then came uncontrolled movements, dyskinesia. It became impossible to walk in a straight line. And through it all, the feeling of being constantly wired, switched on, all senses receiving, on edge. I realised, years later, that my first symptom was really an episode of depression, which was the chief reason I resigned from parliament in 2008.

Up to 40 per cent of PD sufferers endure depression as their first symptom, but don’t realise that it is due to PD. And why would you if there are no other symptoms? After diagnosis I was prescribed a dopamine replacement medication and my doctor suggested it would work well for five years, but that the following five years would get progressively tougher, which they did. In 2018 he did offer hope with what was, initially, a frightening therapy – deep brain stimulation, which involved the placement of two electrodes deep into my brain, connected to a battery that ensured a constant electric current would mimic the production of dopamine. It has worked well, especially in alleviating movement aspects of the disorder.

But PD is still a chronic, degenerative disease, and continues merrily down its chosen path, dragging me behind it. In recent months, I’ve found greater impacts on my psychological and mental health, my speech and cognitive ability. That leads to self-doubt, depression, uncertainty, awful loss of confidence. How long it will torment me in this way before moving on to other things, I do not know.

I don’t know how people living alone or without support from a loving family make it through. If they do, it’s because of the kindness and professionalism of caring therapists and clinicians. They enable me to stay involved in life, to still play a role, and to not give in to the darkness.

The challenge of PD has changed my life like nothing else. I never expected it and I know I’m not dealing with it very well.

Me, you, none of us can escape the inevitability of life-changing challenges that are rolling down the years towards us. They make and too often break us. Parkinson’s did that for me. I have hoped over the years since that it would stir a stoic resolve, a capacity to bear the strain, and to move on, despite the weight. Rather it has left me feeling bereft, and hopeless.

PD has turned me upside down. I just wasn’t ready for the shock.

John Watkins was NSW’s Labor deputy premier between 2005 and 2008. He is a board member of Parkinson’s NSW.

Parkinson’s Awareness Month provides opportunities to learn more about the issues facing people living with Parkinson’s every day – and how their lives can be improved.

No-Escape Room allows people to step into the shoes of people living with Parkinson’s and helps to shift the common misconception that it is a disease of the elderly.

Your donation will enable us to continue and grow services and programs that enhance the quality of life for people living with Parkinson’s.