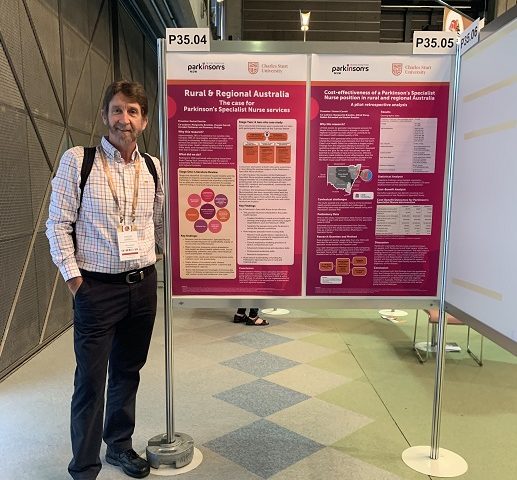 Vince’s is based in the Mid North Coast Local Health District (MNCLHD) and his position is 50/50 co-funded by the LHD and Parkinson’s NSW.

The research placement was described as “…an outstanding learning opportunity”.

Key outcomes of the program included enhancing research capacity of the staff involved and the forging of close collaborative links with research institutes.

As a result of Vince’s placement, he forged close relationships with a number of NeuRA researchers.

One of the researchers, Dr Lewis Ingram, at the time of Vince’ placement was a PhD candidate undertaking research on the upper limb.

With Vince’s involvement, NeuRA expanded the study to include people with Parkinson’s. This resulted in Parkinson’s NSW supporting NeuRA with the recruitment of participants into the study from Coffs Harbour.

The study has now been accepted for publication with PeerJ.

Background: Upper limb motor impairments, such as slowness of movement and difficulties executing sequential tasks, are common in people with Parkinson’s disease (PD).

Objective: To evaluate the validity of the upper limb Physiological Profile Assessment (PPA) as a standard clinical assessment battery in people with PD, by determining whether the tests, which encompass muscle strength, dexterity, arm stability, position sense, skin sensation and bimanual coordination can (a) distinguish people with PD from healthy controls, (b) detect differences in upper limb test domains between “off” and “on” anti-Parkinson medication states and (c) correlate with a validated measure of upper limb function.

Conclusions: The upper limb PPA provides a valid, quick, and simple means of quantifying specific upper limb impairments in people with PD. These findings indicate clinical assessments should prioritise tests of muscle strength, unilateral movement and dexterity, bimanual coordination, arm stability and functional tasks in people with PD as these domains are the most commonly and significantly impaired.