Step Up for Parkinson’s 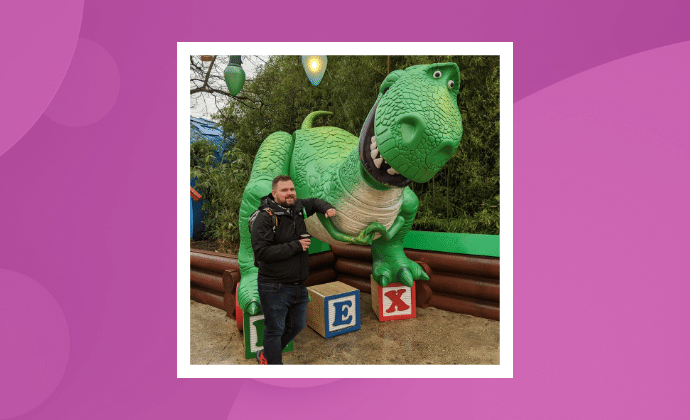 Peter Evans – who prefers to be called Pete – has a role at Parkinson’s NSW which bridges the work of the Fundraising and Digital Marketing teams.

He is responsible for helping to conceive, then building, driving, and measuring all of the Parkinson’s NSW online sponsorships and events. It’s a job which requires knowledge and experience of both the event management and fundraising worlds – with a large dose of technology skills thrown into the mix.

Pete began his career almost 20 years ago in event management in his hometown of Brisbane – from where he still works remotely. He then made his first foray into the not-for-profit world by joining Drug ARM, an organisation that provides a range of services to support individuals and families affected or at risk of being affected by drugs and alcohol.

From there, he moved into fundraising for Guide Dogs Australia, Seeing Eye Dogs and Vision Australia.

“During my time at Vision Australia I was fortunate to be mentored by Jo-Anne Reeves and Margaret Scott, who are today the CEO and Chair of Parkinson’s NSW, respectively.

“Jo-Anne and Margaret were among the pioneers of modern, more targeted, and efficient fundraising. As new trends emerged, they would urge me to explore and develop new skills – particularly in the online space,” he said.

Pete has been growing that skillset for the past 16 years now, and he didn’t think twice before accepting an offer to join Parkinson’s NSW which was itself evolving from a traditional approach to fundraising, to a more modern and measurable model.

“I really enjoy working for an organisation where everyone gets along and shares the same goals,” said Pete. “I’m also in a role where I can experience and appreciate the services actually delivered by the organisation. I can be exposed to Support Groups and see exactly what our nurses, counsellors and support coordinators are delivering for people living with Parkinson’s and their families.”

When he is not on his computer for work, Pete prefers to take a distinctly non-digital approach to life. He enjoys watching movies, walking his dog, and building Lego models.

Resuming travel is high on his future agenda. Pete and his partner were on the first leg of an overseas adventure when COVID-19 struck and Queensland closed its borders. They quickly returned and were able to quarantine at home instead of in a hotel.

Fast forward two and a half years, and now Europe and America have re-opened. “I can’t wait to get on a plane again!” said Pete.