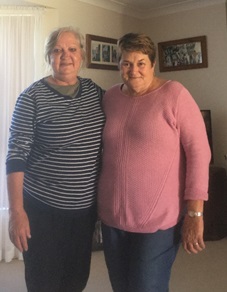 At 65 Joan Norrie has been living with Parkinson’s for more than twenty years.

The disease came upon her as a busy mum; she juggled work, family, and a complex medication regime until ultimately electing to undergo Deep Brain Stimulation (DBS) surgery in 2013.

The positive impact of DBS on her mobility and independence was immediate. However, for the majority of people who undergo this surgery, voice and swallowing do not improve. In some cases, speech and swallowing may even worsen.

For someone like Joan, at the centre of a busy family, saving voice was critical. She was determined not to be amongst the 80 percent of people with Parkinson’s who develop voice and swallowing difficulties.

Karen Hartmann, Support Worker, with Joan Norrie who is living with Parkinson’s

When Karen Hartmann started working as Joan’s support worker three years ago the pair hit it off immediately. They both grew up in the country, had worked in aged care and shared a love of crafts.

In late January 2020 Karen accompanied Joan and her husband Garry to hear more about an innovative new therapy for preserving voice in Parkinson’s.

The pilot program for Port Macquarie would combine face-to-face services, home programs and Telehealth treatments – and in Joan’s case would be fully funded by the National Disability Insurance Scheme (NDIS).

The SPEAK OUT!® and LOUD Crowd® therapies address the motor speech deficits associated with Parkinson’s. They were established more than ten years ago in Texas by the Parkinson Voice Project and brought to NSW by Optimal Speech Pathology in 2018.

SPEAK OUT!® combines speech, voice, and cognitive exercises. Most people require only 8 to 12 individual treatment sessions.

The maintenance component of the program consists of speech therapy groups to help patients maintain the strength of their voices. LOUD Crowd® provides ongoing vocal practice, accountability, support, and encouragement.

Joan’s pathway to learning to SPEAK OUT!® was far from smooth.

Fires and floods in the region led to some false starts for her Speech Pathologist Colleen Kerr who was travelling from Sydney to Port Macquarie to begin Joan’s intensive treatment.

But in early March, right on the cusp of the COVID-19 pandemic, Joan started her program. Joan and Karen would then video-call two or three times per week for sessions with Colleen or another member of the Optimal Speech Pathology Team – Sam Maunder from Wagga. 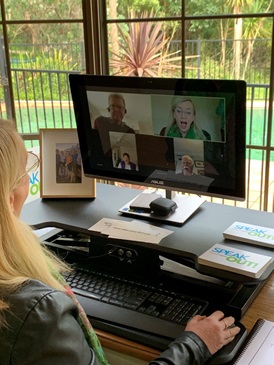 There were some challenging issues with telecommunications connectivity, however Joan completed her treatment amidst a global pandemic and the transformation was inspirational for everyone.

JOAN’S FAMILY AND FRIENDS HEAR AND SEE THE DIFFERENCE. SHE IS LOUDER, MORE EXPRESSIVE, AND QUICKER TO JUMP INTO CONVERSATIONS.

Joan’s work in preserving her voice is not done. She will be working hard at speaking with purpose and intent for the rest of her life. She is already putting her new confidence to use – cracking the whip on fellow LOUD Crowd® participants if they aren’t putting in enough vocal effort.

And the work is not done for support worker Karen either. She’s been so inspired by Joan’s results that she’s determined to assist other people with Parkinson’s to reclaim their voice.

Karen hopes to work with Colleen, Rachael, and the local Parkinson’s community to look into how more people in the region might be able to access these therapies.

The Parkinson Voice Project have met the COVID-19 challenge with creativity and generosity. It is offering free online lessons every weekday for people with Parkinson’s all around the world.

These sessions are designed to help people who have completed the SPEAK OUT!® and LOUD Crowd® therapies to maintain their gains. The lessons are recorded to allow for different time zones, but one session each week is also live for people on Australian Eastern Daylight-Saving Time.

Contact the Parkinson Voice Project to find out more about the online classes, or to source a trained provider in your area: https://www.parkinsonvoiceproject.org