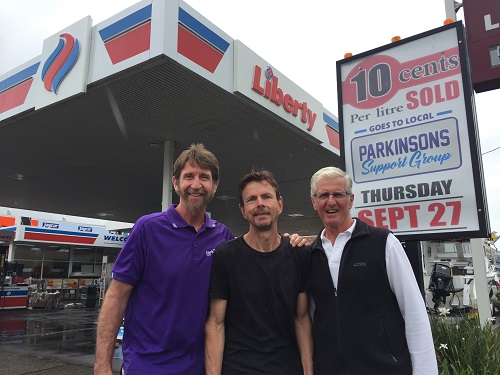 Paul Grant and his wife live on 25 acres at Boambee, south of Coffs Harbour.

“It borders rural residential properties and I’m still doing my best to look after it,” says Paul, whose wife works as a counsellor for children. “We had a horticulture business and I kept working in that for a while after diagnosis. We’ve remained living here but have shut things down.”

“I was the new kid on the block as far as Parkinson’s went,” he says. “The advantage of being in my younger years was that I had a younger, stronger body and it developed quite slowly over the first eight years. But now it’s progressed, and I don’t drive as much as before. I’m booked in to have Deep Brain Simulation (DBS) surgery.”

Paul found out about the Parkinson’s Specialist Nurse service through word of mouth.

“I used to go to Newcastle to see my neurologist,” he says. “I met Vince Carroll and that coincided with wanting to start a Young Onset Support Group in Coffs Harbour.

Vince had half a dozen younger people he knew with it and we started it three years ago. It’s been really beneficial because before that I hadn’t really met anyone with younger onset Parkinson’s. We meet for coffee and people can ask questions and share problems and solutions.”

“I know he’s provided great personal support to a few of us,” says Paul. “He travelled with one person to get their DBS surgery done. That was a huge benefit to that individual. He’s also an integral part of the Support Groups and meetings.

“He gave me great help earlier this year. I was having a serious treatment issue and he drove out a couple of times and worked with me to help me get the treatment I needed through a Sydney specialist.

“He speaks both the neurologist’s language and the patient’s, which makes things much easier. He’s also travelled with me on a couple of occasions.

“It would be hard to list all the things that he does, and I’m sure people might not know about many of them.”